Jerry Mellick is pleased to report the Vietnam Helicopter Pilot and Crewmember Monument Dedication Ceremony was held on Wednesday, April 18, 2018, at 4:00 PM in the Arlington National Cemetery (ANC) Memorial Amphitheater with a  post-ceremony reception at the Women In Military Service For America Memorial located near the cemetery entrance.

For those unable to attend, the VHPA Legacy Committee was able to arrange C-SPAN coverage of the amphitheater portion of the event. The event will air on Sunday, May 6th at 11am on C-SPAN3’s American History TV.

The news media was present at the ceremony, and below are links to some of the video/written reports:

Several chapter members (including Jerry Mellick) attended and passed along pictures and a video shot from the fly-by aircraft.

For several months, preparations were made in Spokane, Washington to coordinate all elements and efforts supporting the Vietnam “The Wall That Heals,” a 250-foot replica of the Vietnam Veterans Memorial.  Many organizations assisted the Public Broadcasting Station KSPS to accomplish this event held between August 23-27, 2017 at Mirabeau Park in Spokane Valley.

“The Wall That Heals” was strategically located across the street from the Spokane Vet Center whose clinicians specialize in working with combat Veterans and their families. This placement, along with their Mobile Vet Center located up behind the Wall, was established to ensure clinical support resources were readily available to our local combat Veterans and family members visiting the site.  The Vet Center, the largest in the nation, was staffed 24 hours a day to assist with any support required for Vietnam veterans who might want to avail themselves of their services.

All of this is a lead up to the 10-part historical documentary series, produced by acclaimed documentarian Ken Burns, “The Vietnam War,” being released in September.

The Washington State Chapter of the Vietnam Helicopter Pilots Association (VHPA) was counted among the organizations supporting the event.  Coordination between members of the Chapter, the Olympic Flight Museum and Northwest Helicopters, Inc. was facilitated the static display of the venerable and iconic Huey towed on a custom trailer across the mountains.

The head of the Wall didn’t want the Huey positioned in proximity to the Wall or to the two large trailers housing Vietnam memorabilia as it was thought the presence of the aircraft could be some kind of trigger to a Veteran.

Even with my continued negotiations about that not being an issue, including my personal evidence of over 15 years of flying veterans in Hueys and Cobras with both the Army Aviation Heritage Foundation and the American Huey 369 Organization, I could not convince them to let us park the Huey close to the Wall or the trailers.

Initially, the aircraft was placed across the street at the back of the parking lot by the Spokane Vet Center, but after the first day, we were permitted to move the aircraft closer to the road so that it could be seen more easily by visitors to the Wall and security personnel.  In addition, the PBS station KSPS created signs and put them strategically around the area to ensure people knew where the Huey was located.

We didn’t have the capability to count the people who came to visit the aircraft or know the percentage of the total visitors, but the five of us from the Chapter were kept very busy showing off the aircraft to a large number of visitors.  We supported the Huey at a minimum of nine hours each day for two days until dark.

The visitors, young and old, were all very appreciative of us bringing the Huey to the event, as was the PBS TV station and the Eastern Washington University personnel.  There were many tears shed as aircrew members, medics and grunts remembered their various connections to the helicopter war.

PBS Station KSPS and all their personnel, who arranged for this to happen, and supported by many community businesses and organizations, need to be highly commended for their efforts.  I was extremely impressed by the several KSPS personnel who worked tirelessly all through the event.  Same for the lead individual from Eastern Washington University.

The event, although tied to the more than fifty-eight thousand who died during the war, was specifically tied to the 214 Eastern Washington and Northern Idaho military personnel who didn’t make it back.  Included in that number were nine of my Eastern Washington University (then Eastern Washington State College) ROTC Classmates from the 60s and 70s who lost their lives.  We had bios of all of them on display at our EWU booth with members of that era’s ROTC graduates who manned the booth all day each day.

It was a very tiring five-day event, but based on the comments about the overall event and the presence of the Huey specifically, I’m glad I was able to be a part of the planning and operation of the event. 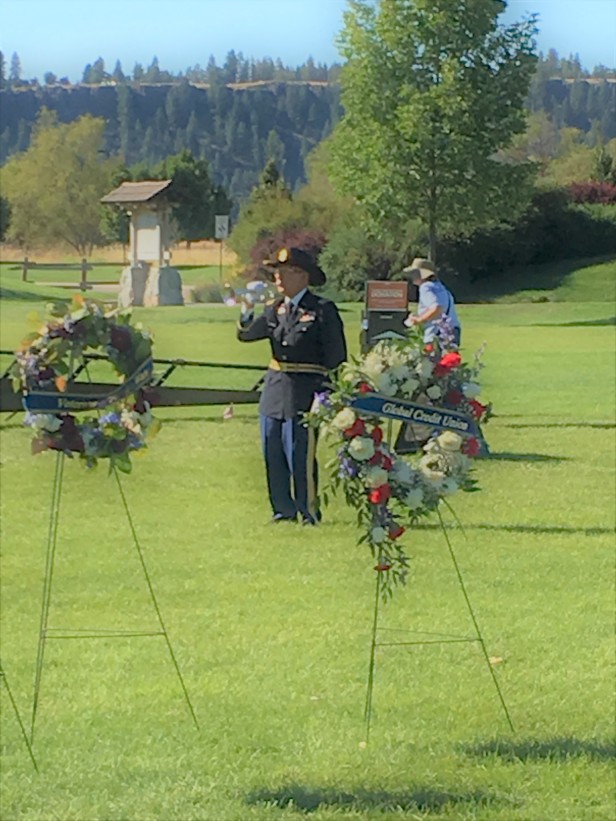 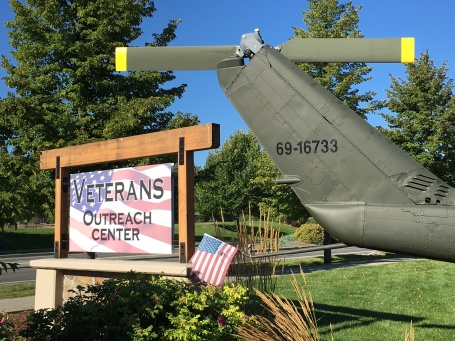 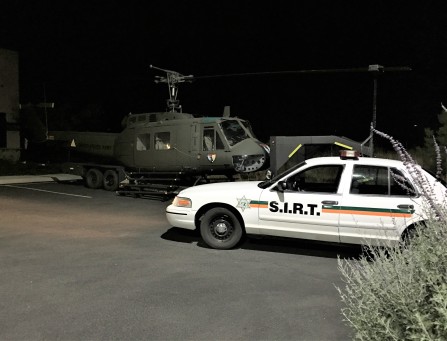 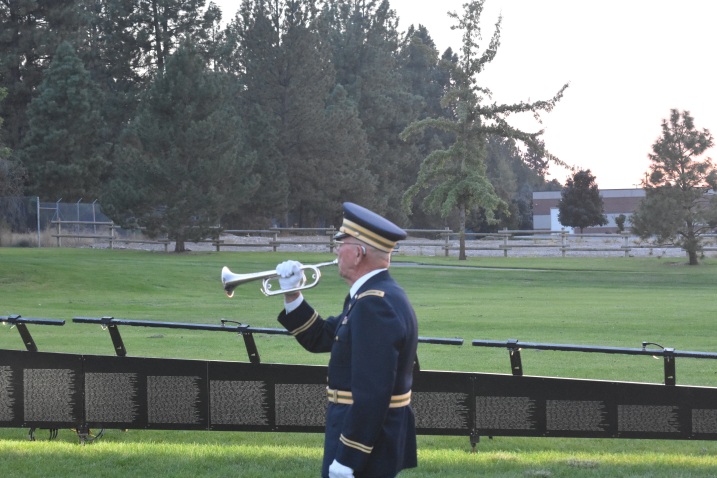 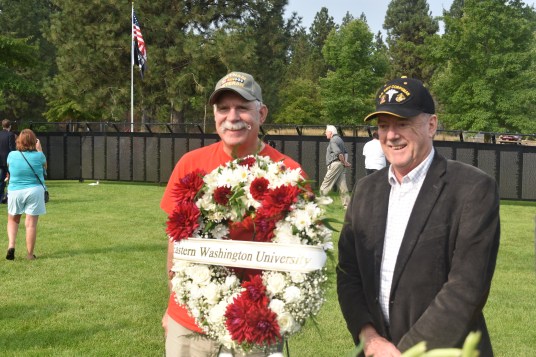 The KSPS Public Television Station, along with Eastern Washington University, is sponsoring “The Wall That Heals”, a 250-foot replica of the Vietnam Veterans Memorial, along with a mobile Education Center, on August 24-27, 2017 at Mirabeau Park in Spokane Valley.  Eastern Washington University has developed three public forums about the Viet Nam War, with the with the first two having been completed. (Click on these links for maps to these locations in Spokane Valley, WA.) Members are encouraged to help man the aircraft to answer questions.

“The Wall That Heals” will be strategically located across the street from the Spokane Vet Center whose clinicians specialize in working with combat Veterans and their families. This placement will help ensure that clinical support resources will be readily available to our local combat Veterans and family members as they visit.  The Vet Center, the largest in the nation will be in operation 24 hours a day to assist with any support required for Viet Nam veterans who might want to avail themselves of their services.

All of this is a lead up to the 10-part historical documentary series, produced by acclaimed documentarian Ken Burns, “The Vietnam War,” in September.

The Washington Chapter is bringing a UH-1 Huey to the event from the Olympia Flight Museum, Olympia, WA area and will have it stationed in close proximately to the Wall.  It will be staffed with VHPA members from both sides of the state.  When the option of having the Huey co-located with the Wall was offered, the sponsoring organizations were extremely happy to have our Huey, being the iconic representation of the Viet Nam War.

During the event, we will be taking pictures and talking to veterans, aviators and others alike, and plan on collecting as many remembrances and stories as possible to provide an article for the Aviator Magazine.

Detailed Schedule for The Wall that Heals:

As the webmaster, I would like to welcome you to our newly designed website. Yeah, it’s about time. The original site was developed with technology Microsoft abandoned almost as soon as it was developed in the early’90s. I felt it was important to re-engineer the site so it could be administered by (almost) anyone and hosted by a nationally recognized company who could perform the periodic maintenance and assure uptime when I’m out of town or the country. With the board’s agreement, I’ve chosen WordPress as the hosting company and site development tool.

Depending on the vagarities of life, we’ll be posting stories about the Chapter and individual activities right here. The site will soon have a new home but the same URL. It will no longer be subject to power outages at Bill’s house or his absence.

If you have something to contribute, send it to the webmaster or the current secretary or Chapter President. All content is subject to approval.

This page provides a place for the President and support team to keep everyone up to date.

See the Next Meeting page for more information.

The Vietnam Helicopter Pilots Association (VHPA) is a non-profit veterans organization filed under Section 501(c)(19) of the Internal Revenue Service.